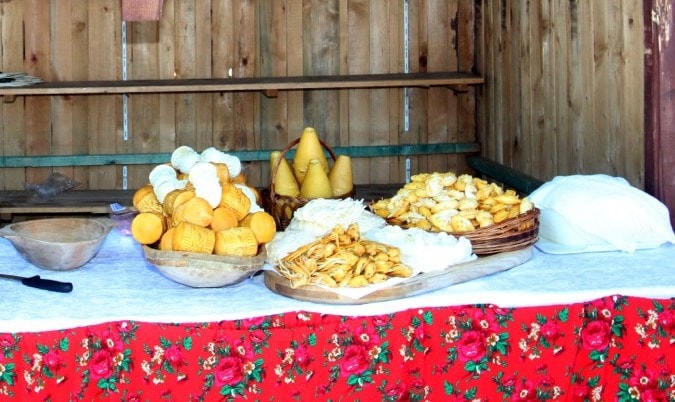 Oscypek, bundz, bryndza, żętyca, gołka, redykołka … these polish names will definitely be heard at Krupowki street, or everywhere where we deal with original mountain cheeses. They are often confused, or all of them put in one basket with the name oscypek. Meanwhile, a true connoisseur will distinguish all these products.

Let’s start with the production cycle. It takes place only in the Podhale region, in shepherd’s huts – by a shepherd who grazes sheep and milks them in summer. The milk goes to a large pot, where it is brewed together with the rennet, but it does not boil. Rennet cuts off some of the proteins, which are strained through a specific cloth and are formed into a cheese called bundz.

Bundz is selected in portions from a straining cloth. After this bundz is put into a special wooden carved rim. Then it goes into salted water for some time. And after this, it gets squeezed to give it its form and to get rid of all the excess water. Then, after removing the rim, the cheese goes to smoking. It smokes in the smoke of the same fire where milk was brewed.

After smoking, we have oscypek cheese. Cheese that has not been made into oscypek is called bundz. It is also very delicious with salt, similar in taste to the Greek Feta. On the streets of Zakopane, we can find stalls where people sell oscypek and all the other kinds of regional cheese.

HOW WE EAT OSCYPEK?

Oscypek can be eaten thinly sliced and raw, but it tastes even better when fried in slices with cranberry jam or lingonberry jam. Bundz is eaten only in the form of thick salted slices. When the bundz begins to age and a light coating forms on it – it gets grounded in a food processor or by a traditional method – by hand and mixed with salt, and that is how bryndza is formed.

Due to frequent cases of simulation of Oscypek, shepherds fro the Podhale region took care of their interests. Currently, oscypek and bryndza are names protected by European Union law. The Podhale cheeses can be made only in a specific area (Zakopane is an example) and according to a specific recipe.