Kuźnice is an exciting district of Zakopane. There is: the cable car station to Kasprowy Wierch and the beginning of many beautiful tourist routes, the Manor and Park Complex named after Count Władysław Zamoyski with the headquarters of the Tatra National Park, two exhibitions and an outdoor photo gallery.


THE MOST PLEASANT DISTRICT OF ZAKOPANE

A visit to Kuznice is recommended to both young and old tourists. It is most convenient to come here using a bus from the PKS station (or from several other stops in Zakopane) and then go down (all the time down) back to the center. It is best to start the walk in the beautifully restored Manor and Park Complex named after Count Zamoyski (TPN headquarters). Here you can see an outdoor photography exhibition and two galleries (free admission). First presents a collection of stuffed animals by Antoni Kocyan, and the other is dedicated to the Zamoyski family (beautiful photographs of former Zakopane).
Leaving the park on the street “ul. Przewodników Tatrzańskich” on the right, we pass a symbolic tomb of an unknown servant. It is one of the oldest monuments in Zakopane (the cross and grille are cast from iron smelted in the Kuznicki smelters in the first half of the 19th century).
A little further on the left is the monument of Wladysław Hasior with a name “Prometeusz rozstrzelany”, and on the opposite side of the street – a shepherd’s hut, where oscypki (traditional cheese) is sold in spring and summer.
Going further down on the right, we will see a dam on the Bystra stream. After a few minutes on the left, we will pass “Księżówka” – it is the Episcopal holiday house. Here John Paul II stayed during the pilgrimage to Poland in 1997. Near the house, there are the stadium, ice rink, running tracks, tennis courts. Well-known Polish athletes often train here.
The last building in front of the John Paul II roundabout is the wooden restaurant “Kolibecka”, which is highly appreciated by local people (beware of huge portions …). The walk from Kuznice to the roundabout takes about 45 minutes (not including visiting exhibitions).
At the roundabout, we can turn left, and after about 800 m, we reach the Wielka Krokiew ski jumping area.
. 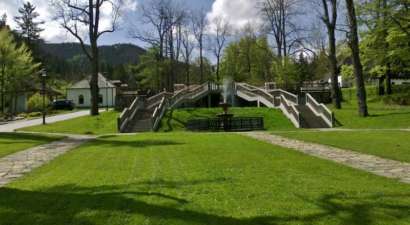 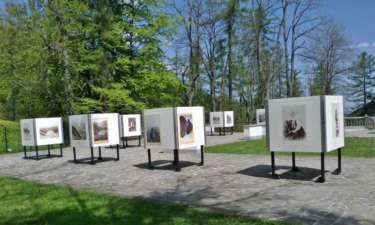 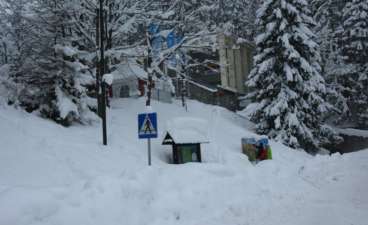